This scorching weather reminds me of the holiday we spent in Singapore a few months back. It was December, and it was so hot there. Good thing Singapore is well equipped with good public transportation or else we would go bankrupt taking airconditioned cabs.

We stayed at The Concorde Hotel along Orchard Road. We were with family and it was best that we stayed in a place where there were lots of food and shopping places nearby. I can see that the hotel has been operating for quite sometime due to the 70's-80's design, but it has been well kept by the management. 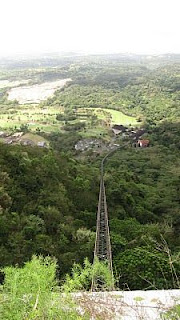 M and I found ourselves driving off to Tagaytay one weekend for a meeting of his. We were invited to stay for the night at the posh Tagaytay Highlands. It was our first time and we were excited. We drove off early to escape the coding scheme on a Friday, so we found ourselves lounging at Nuvali in the morning.

For lunch, we went to The Grill by Antonio's to try their Chicken Inasal. But M found other stuff to devour. Give them time to grill your food. :) 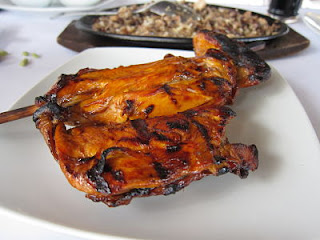 Chicken Inasal  P110
It was okay. I like mine a little more garlicky and sweet-ish. It came with some annato oil and some fresh garlic, vinegar and soy sauce. Not the best I've tried, but was satisfied, nonetheless. :)

(This is going to be quite a long post as I have been remiss of my duties lately. )

We went to Taipei, Taiwan on the first day of November. After initially reading up on Taiwan, I stopped doing research when I realized that it was futile because we were going with a group, and I only had to follow. So after knowing that Din Tai Fung originally came from Taiwan, I let it go at that and packed our bags with a free mind (well, empty was more like it. ) I only knew that we had to eat at Din Tai Fung, and that was it.

When we arrived, it was cool. We loved the temperate climate. The airport was hazy and had a few pine trees. Dreamy climate. 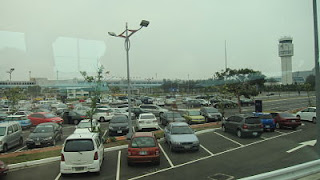 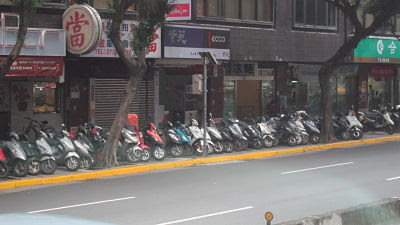 Taipei is a very modern city. I thought it would be old fashioned. Like a huge Chinatown from Manila. But  M and I agreed that it did feel like Tokyo. We were giddy. When we reached downtown, I saw many sidewalks with motorbikes parked on it. Motorbikes are the popular transportation of choice by the yuppies and some. It was Motorbike City. 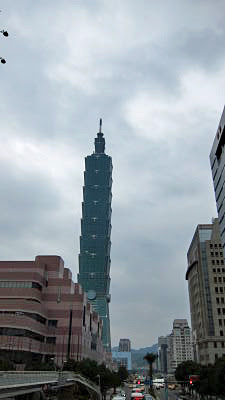 Next to Din Tai Fung, M wanted to see Taipei 101. Only there did I know about it.  Were were lucky because we were billeted in a hotel just near it. Around 2 blocks. It was so close, we had a view of it from our balcony. Lucky lucky us.

We arrived at around noon time, and we were left to fend for lunch on our own. M and I decided that we would explore the neighborhood. Just right behind Pacific Business Hotel, was this food strip of street food.
M was drawn to this stand. There were so many people lining up, and service was quick. It was just noodle soup. We waited to see how we would order. We waited for quite sometime until finally, the vendor looked at us...amused that we looked like lost kids. Or lost people. 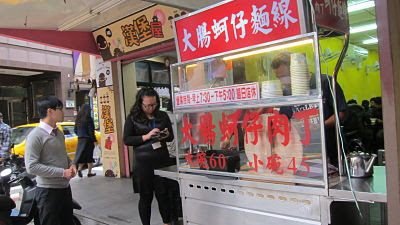 Next to the Vermicelli stand was this dumpling stand. The steamed dumplings would be seared for a while before serving. Again, there were so many people lining up, I waited to see how to buy from him. Alas, he couldn't understand a thing. Luckily, a young lady in an office attire understood me and spoke English. She told me that one dumpling cost NT5 or 5 Taiwan dollars. 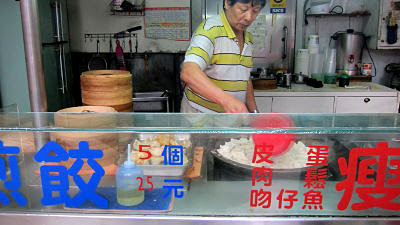 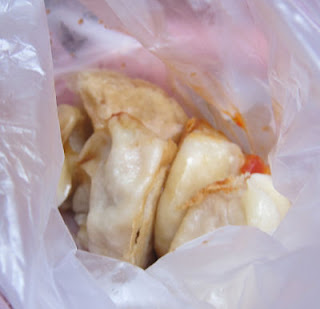 Shall I assume that this is Jian Bao? I LOVED IT.
The dough was chewy and the meat inside soft and tasty.
I wanted more!

Right  across the stall where we  bought these goodies was a fast food where so many people lined up too! It was lunch break, and office people were everywhere. 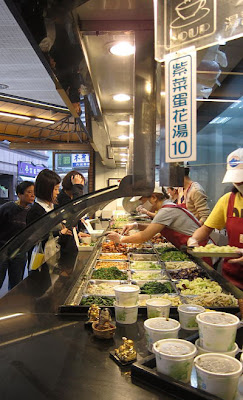 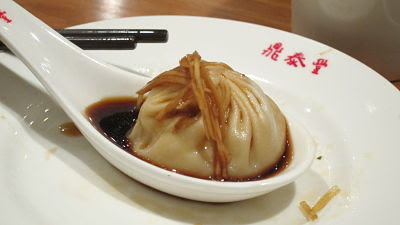 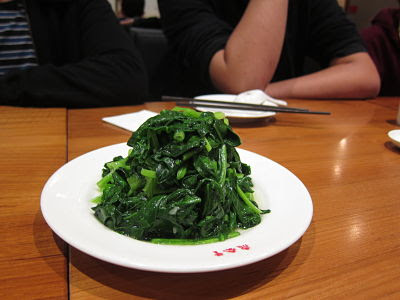 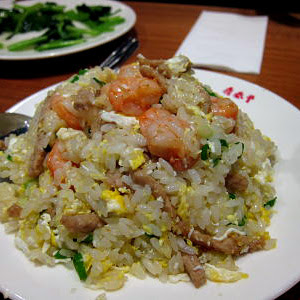 After dinner, we walked back to our hotel and made a side trip to a the Linjiang St. Night Market. 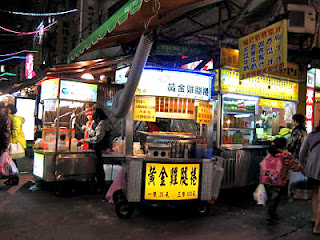 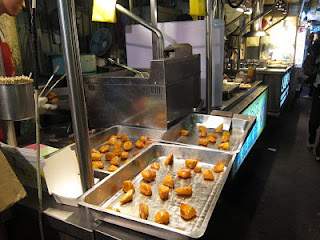 Caramelized sweet yam or sweet potato.
If they stuck these onto sticks, it would be just like our  camote cue!

Day 2
The next day, we went out for a day trip around town. We toured  The National Palace Museum  before lunch time. For lunch, we went to a restaurant nearby named Frogs. No, we didn't have frogs, thank God :) 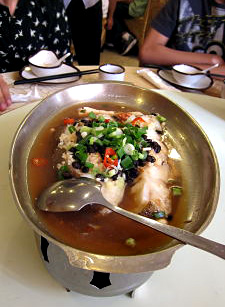 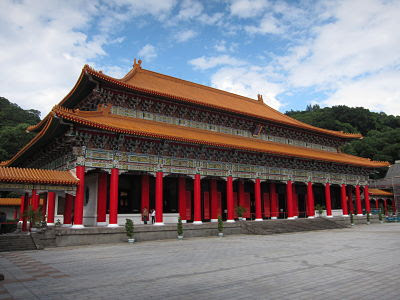 On the third day, we took up the courage to take the train. It wasn't so hard. And they had a good "All Day Pass" ticket for tourists like us. We used up the card good :) 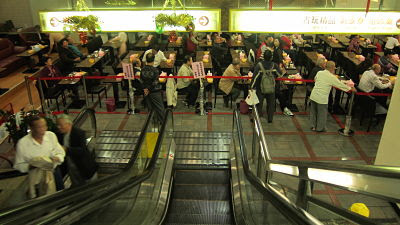 This is the underground mall at the Longshan. There are a lot of handicrafts here. 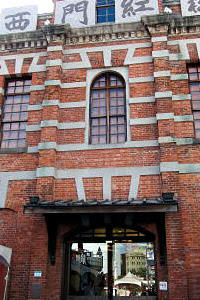 This is the facade of the Red House. It used to be a theater which they then
converted in to an art gallery of sorts. I love the artworks inside. All modern and whimsical and fun.
There's also a cute cafe and a mini pasta bar. I can live there! 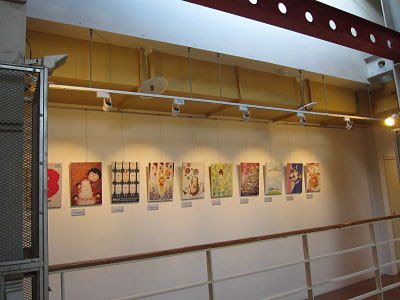 Check out those whimsical paintings on the wall. I love it here! 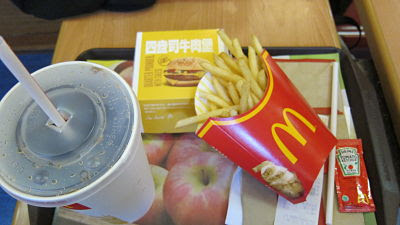 We had lunch at the McDonald's of Ximending. Shown here is a McDonald's Cheeseburger Meal.
The burger here is not that different from ours. But ours is beef-ier, I think. 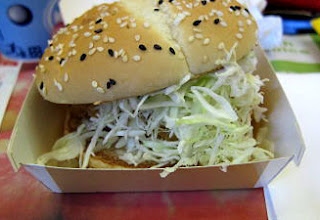 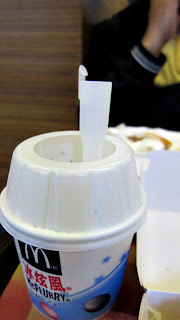 Look at the spoon handle of the McFlurry there.
There's a rectangular pipe in the end,  with a hook.
No, I don't know why the spoon looks like that. 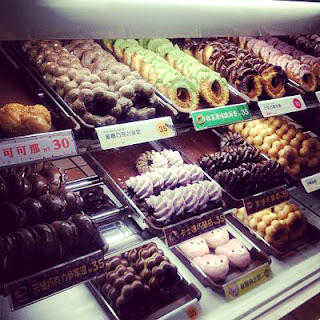 I saw this Mister Donut Shop at the mall near the train stop. The Mister Donut here has lots of cruller type donuts. And they look so pretty too, don't you think? Maybe we can have these kinds too, Mister Donut Philippines?:) 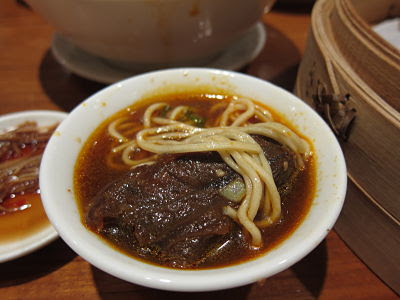 This time, it was just the two of us. We had some more Xiao Long Bao ( for three days in a row!), and we finally tried this Spicy Beef and Tendon Noodle Soup which Taiwan is famous for. I liked all the beefy goodness, and the beef tendon fat. But the soup was a bit too anise-y for me. Hmmm. 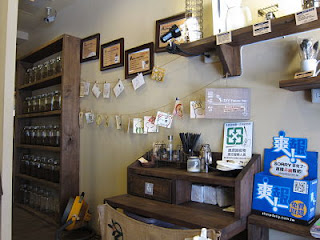 I made M promise for us to drop by Cama Cafe at least once on this trip.
I found all the cute stuff on the wall endearing. No, it wasn't for the coffee. :D
Although, I did like the Roasted Milk Tea we had.
They have so many cute art prints on the wall, and vintage accessories like lamps and coffee makers.
The wood on white is just the kind of interiors I swoon for.
Love love Cama Cafe.

Xie xie, Taipei. For the history and the food. We like you. We really like you. Xie, xie!

Welcome to my corner!